A symphony in dialogue, Harold Pinter's depiction of underworld existence in 1950s Britain brutally reflects the influence of class structure, and power, in a subservient society.

As the play premièred at the Hampstead Theatre Club in 1960, Israeli intelligence agents were closing in on Adolph Eichmann in Beunos Aires. He was captured and faced trial in Jerusalem the following year for his callous and remorseless implementation of the German extermination programme.

Later that year, intrigued by the case, and the apparent willingness of individuals to accept authority and commit atrocities on request, psychologist Stanley Milgram devised an experiment where subjects were tricked into thinking they were punishing another subject for making mistakes in a learning exercise. They were actively encouraged to use electric shocks which increased to fatal voltages.

Psychologists and psychaitrists predicted that barely 1% of subjects would allow themselves to be browbeaten into administering the shocks. In practice 65%, despite protesting, and showing signs of extreme stress, proceeded to the maximum voltage - 450V.

Apart from being extremely unethical (it certainly couldn't happen now), the experiment demonstrated a terrifying willingness by members of a general population to submit to 'authority' and commit appalling abuse to order. (The shocks were not real, and the 'students' actors - but that was cold comfort to the subjects whose facility for barbarity had been exposed.)


Armed with the awful revelations of the Nuremburg Trials ten years earlier, Pinter foreshadowed Milgram's results in 1957 with the publication of his dark drama 'The Dumb Waiter'. Two men wait in a basement under orders from an unseen character 'Wilson'. They are prepared to commit murder - without knowing the victim or the reason.

Although it seems to be implied that they are paid for this work, they are clearly not wealthy - and are not provided with much comfort as they wait. Then the 'experiment' begins. Farcical orders are sent down to basement where the two men are waiting. Suspecting that Wilson is behind the orders, the two make equally farcical attempts to comply.


When the subservient Gus protests, the dominant Ben insists - but they are both in the thrall of the 'higher power' above. Ben, emboldened by the little power he has, is unbending in his allegiance  to Wilson. Gus, as powerless victim, is, ironically, more willing to question and resist - even challenging his overseer Ben and the unseen power above.


'The Dumb Waiter' ventures into the world of the absurd - later fully developed by Eugene
Ionesco in plays like 'Délire à Deux' (Frenzy for Two) in 1965. Pinter's absurdity, in this case, is coldly logical - the logic of abuse. What the victim/executioner cannot understand, he cannot argue against.

'The Dumb Waiter' is produced and performed by a seasoned group or actors.

Rosie and Midge Mullin, and Michael Gilpin, are all members of Louis Ravensfield's 'Exeter Alternative Theatre' (who produced 'Grand Guignol' and 'Quills'). At Exeter Ignite Festival Rosie and Midge with Sarah White and Richard Pullman (as Bare Bones Theatre Company) presented 'Self-Centred'. In a writing collaboration, the four presented the four voices of 'Danny' in his journey to gender reassigment.

Now Rosie takes on her first solo directing role, with Substance and Shadow Theatre Company. In addition to Michael Gilpin, Rosie and Midge are joined by Samantha Taylor, their costume designer and 'special effects unit' who makes the dumb waiter totally convincing.

On stage Midge and Michael, with Rosie's skilled direction, are equally convincing as the dehumanised minions of a malign criminal boss. The photos above show them in rehearsal at the Exeter Little Theatre Company studio space in Preston Street. The clothes are integral to the plot, so every rehearsal is a dress rehearsal. Simply imagine the backdrop of your local theatre to get the full effect.

Starting on Thursday 27th September, there will be five performances, one in Exmouth, two in Topsham and two in Exeter - at the Blackmore Theatre, Matthews Hall, and the Garden Room of the City Gate Inn, respectively. For a very special evening of psychological suspense and very dark comedy, tickets are available now. 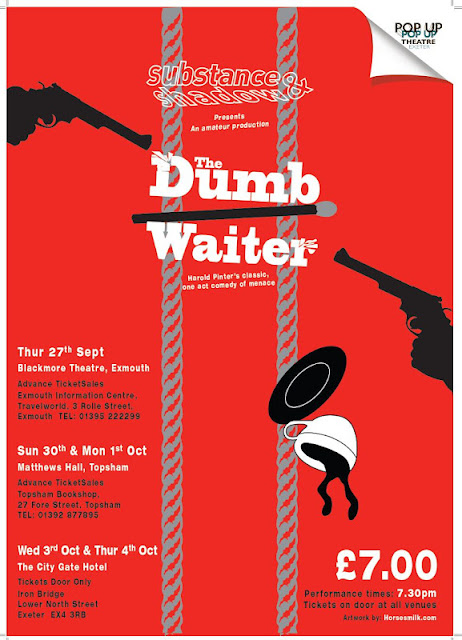 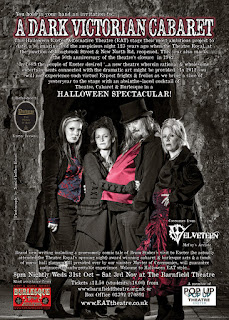