With a busy international concert schedule taking them across Europe, they will perform in Newton Abbot as part of their UK 2018 tour.

The Arcadia Quartet have chosen to perform works of enormous contrast, encompassing wit and humour, lyric beauty, serenity, lightheartedness and stark intensity: in fact, the whole gamut of emotions. It will indeed be a concert to entertain and stimulate.

The concert is sponsored by Wollen Michelmore, Solicitors.


Enjoy an afternoon of entertaining and stimulating music at the Courtenay Centre, Newton Abbot, on Sunday 18 February at 3pm, when nadsaconcerts presents the Arcadia String Quartet in the 5th concert of the season. This multi-prize-winning quartet, formed in 2006 while students at the Gheorghe Dima Music Academy in Romania, is rapidly establishing itself as one of the most exciting string quartets of their generation.

Although Gregorio Allegri (1582 – 1652) and Alessandro Scarlatti (1660 – 1725), had already written sonatas for four string instruments without harpsichord, there can be no doubt as to Haydn’s unparalleled contribution towards the development of the string quartet. In his freeing of the cello from its traditional accompanying role, and his imposition of the Classical style upon the genre, he became known as the ‘Father of the String Quartet’.

Haydn’s music is well-known for its easy-going sense of humour and wit: his quartet,‘the Joke’, with its robust earthiness and gleeful unpredictability, is no exception. Second of a set of six written in 1781, ‘The Joke’ is the 30th of his 68 string quartets, and is a wonderful example of his incredible imaginative genius.

Born, illegitimate son of a nobleman and a peasant, in St Petersberg, Borodin (1833 - 87) enjoyed a good private education, had a brilliant career as a research chemist and professor of chemistry, and was a strong advocate of women’s rights. Composition, initially always secondary in his life, gained prominence in the 1870s, and it was owing to Liszt that his music began to be performed outside Russia during this period.

Borodin wrote his 2nd string quartet in 1881 (a century after Haydn’s ‘Joke’). Dedicated to his wife, Katerina, for their 20th anniversary, its haunting and, at times, overwhelmingly evocative lyricism has ensured its place in the hearts of listeners.

Shostakovich’s 8th quartet is a masterpiece of the twentieth century. Composed in only three days in 1960 during a visit to Dresden (to compose music for film), it was inscribed ‘In rememberance of the victims of Fascism and war’. 1960 marked a turning point in his life: he joined the Communist Party and his health deteriorated further. Shostakovitch filled this quartet with quotations from earlier works, and the main theme (based on his name) opens the work and recurs throughout. Despite its austere and tragic music, it enjoys outstanding appeal and is the most loved of all his 15 quartets.

The Arcadia String Quartet, having recorded both Janacek’s ground-breaking quartets, are in the process of recording the complete quartets of Bartok. They are an ensemble not to be missed.


Ruth Molins is a very popular and much admired flautist here in Exeter. For many years she has been performing with orchestras and ensembles, as well as giving solo performances, throughout Devon and beyond. In addition to her work with existing ensembles, Ruth has also started her own flute trio, 'Flute Cake', with Sophie Brewer and Jennifer Campbell. Many people have enjoyed their delightful music at weddings and other social occasions, as well as formal concerts.

Ruth also teaches flute (as well as piano), and founded 'Exeter Flutes' in 2016 to provide opportunities for her students to enjoy and learn from performing in a flute choir. Lessons take place in Ruth's music studio at 37 Clifton Road in Newtown, Exeter (next to the Globe). This year Ruth will be giving a series of solo performances in the music studio, with a chance to join Ruth for a cup of tea and discussion of the music.

These recitals will be a wonderful opportunity to share musical experiences with a very talented and creative musician. Ruth has always amazed audiences with her spectacular flute playing in concert performances - and also on air on the many occasions when she has performed live for us in the Phonic FM studio.

Below is the provisional list of recitals for 2018.
Tickets are £10, or £8 in advance
Advance booking will be through ruthmolins.bigcartel.com

Posted by Luch Càise-Dearg at 08:18 No comments: Links to this post

John Wellingham is giving a talk and recital at St John's Church, Bridgetown , Totnes on Wednesday 14 March at 7 p.m.

He is going to talk about three Totnes organs; the Father Willis organ at St Mary's Church , Totnes, the organ that was lost in the fire at St John's and the present organ, built by William Drake, which he will play.

John has been a major influence on British organ students. He is now in his eighties, and still active as an inspirational organ teacher at Oxford and Cambridge universities . He studied at Dartington College when Imogen Holst (later with John Clements) ran the music department.

He taught piano, organ and recorder at Eton and was a counter-tenor lay clerk in the Chapel Choir before leaving to study organ , harpsichord, viola da gamba, Gregorian chant and Lutheran chorales at the Schola Cantorum Basiliensis in Switzerland.

In 1974 He founded the Loosemore Centre for Organ and Early Music in Buckfastleigh, the first early music centre in Great Britain. It closed in the early 1990s, but the organ building workshop remains open.

There will be a small charge for the talk, which is one of a series of talks the church have arranged to promote the history and heritage of St John's,and in aid of the St John's Church fund to renovate the church windows.


John Wellingham
St John's Bridgetown Totnes
Wednesday 14 March 7pm
TALK & RECITAL
ON THREE ORGANS
The Father Willis at St Mary's
The St Johns organ lost in the fire
& the present William Drake
(on which John will play a recital)
There will be a small charge to attend
Proceeds to the Church Windows Fund
Posted by Luch Càise-Dearg at 04:13 No comments: Links to this post

Nina was born in Plymouth, but from age 4 to 6 she and her family lived in Russia, where she started learning the piano -- and gave her first concert in St.Petersburg when she was 5. Back in England they lived in Exeter, where she was at the Maynard School, and at age 12 she won a scholarship to Wells Cathedral School where she is now a boarder. At age 14 in her Grade 8 Piano exam she got the highest mark in the South-West. She did well in her GCSEs and is now in the sixth form at Wells. She has won various prizes at national and international competitions, and recently won the Special Honourable Mention Diploma out of all competitors at the Windsor International Competition.

You can hear extracts from Nina's Topsham recital on YouTube where she plays these pieces:

The Rachmaninov, Scriabin and Schumann are all fiendishly difficult,
but Nina played them all with real verve and confidence.

There's a two-page article about Nina, and a lovely photo,
on page 41 of the December edition of Exeter Life.

"This talented young pianist blew us away with her technical skills and obvious passion when she spontaneously played our pop-up pianos in the Guildhall a few months ago. No doubt, she has a very bright future ahead of her, and you can catch a local performance in an intimate setting right here in Exeter City Centre this December. Highly recommended!"

Posted by Luch Càise-Dearg at 14:23 No comments: Links to this post

This is a rare opportunity to be taken on a musical journey to the heart of Russian Heritage and experience its varied nature. Sample the full spectrum of Russian music from its sombre moods to high energy uplifting beats. The extensive programme will include operatic arias and traditional Russian songs from Soviet Era, violin masterpieces and folk arrangements for balalaika featuring some of the most loved Russian composers; Tchaikovsky, Dargomizsky, Rachmaninov, Sviridov and more.

This unique event will feature instrumental and vocal performances of Russian soloists: Mezzo-Soprano,Violin, Folk Vocal and Balalaika, with piano accompaniment.

Performers are all graduates of Russia and its former republics, including:

The concert will be hosted by Lee Shetliffe, a popular entertainer, compere and cabaret performer based in the South West.

There will be drinks and refreshments available during the interval.

There will also be a raffle with a chance to win a traditional RussianPrize.

For information please contact Kate on 07505 884271
or email: ekaterinashetliffe@gmail.com 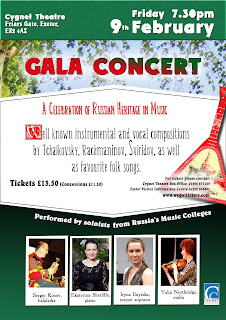 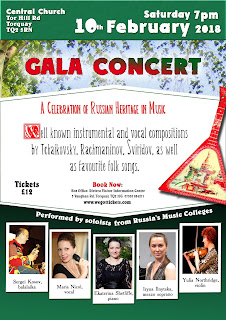 Posted by Luch Càise-Dearg at 13:44 No comments: Links to this post