This Wednesday the Staircase Opera Company start a new run at the Roborough Studios on Exeter University Streatham Campus. Following on from their very successful production of Gian Carlo Menotti's "The Medium" in November 2016 (read review), they are presenting Menotti's spectacular Pulitzer Prize winning 1950 work "The Consul".

Inspired by the plight of displaced persons after the Second World War, this opera follows the struggles of asylum seekers and their exhausting efforts to obtain help from the staff at a foreign consulate. This theme has remained relevant and moving right up to the present day.

The main protagonists are the Sorel family who desperately need assistance to escape tyranny in their own country. John and Magda live with John's mother and their baby son. John's involvement in the fight for freedom attracts the attention of the secret police, putting them all in danger.


The first act opens with singing heard through an open window - actually a recording made this week by soprano Christine Marsden in Dunsford. Dominic Rousseau is the freedom fighter John Sorel. Dominic is taking on his first full-length opera having trained for many years with local baritone legend Alex Poulton. Dominic trained as a GP in Exeter and now works full time as a hospital consultant, while also practicing and rehearsing his singing. His hard work has certainly paid off. As John Sorel he commands the stage and exudes the courage and fear of Sorel with every line.


Carrying the torch for John in his enforced absence are his wife and mother. Carolyn Harries is The Mother who dotes on their grandchild but lives in constant distress at the family's oppressed circumstances. Anna Gregory is John's wife Magda Sorel, a devoted spouse overwhelmed by the impossible responsibilities she is forced to shoulder. Anna is another new addition to the Staircase personnel. She first worked with Carolyn Harries at Scottish Opera, and later at Opera Holland Park. Anna's performance is spectacular. She pours and urgent sense of passion and desperation into her response to all the trials that confront her.


Magda's most threatening adversary is The Secret Police Officer played by Alex Poulton himself. Alex turns his trademark charm and wit to telling effect as the sly manipulative investigator, playing on Magda's hopes and fears ruthlessly. His splendid baritone voice seems incongruous for such an authoritarian thug, but soon takes on a new sense of menace as his every word carries threatening implications.


Literally left holding the baby is Carolyn Harries as John's mother and grandmother to the Sorel baby. Carolyn's magnificent alto voice conveys love and concern for her whole family and Act One ends with a particularly touching trio with her and her son and daughter-in-law reflecting to each other their sense of urgency, foreboding and helplessness.


Rebecca Smith, an established star of Staircase Opera, is the one person who can offer help to the Sorel family in their desperation. As The Secretary to the Consul she has the means to help refugees obtain the visas they need to escape oppression. Rebecca plays the part impeccably. Despite her obvious concern for the unfortunate situation of the applicants who come to her, she is unable to accelerate the bureaucratic process and provide the timely response they need.

In her attempt to provide the best assistance she can, and deal with everyone fairly, she maintains a facade of emotionless efficiency, insisting that everything is done correctly and according to the protocol dictated by the Consul. The tension between her comfortable existence as a civil servant, and the harrowing stories she has to hear all day, tells in her every action - and the expressive use of her powerful mezzo soprano voice. A stunning performance.


Magda's tenuous contact with her fugitive husband is sustained by her occasional meetings with fellow conspirator Assan the Glasscutter. Assan was to be played by Alex Stevens, who sadly was not able to join the cast this time. His understudy is second year Exeter University drama student Thomas Gunning. Thomas developed a love of drama and singing while at school in South Wales. Now he specialises in stage production, but also retains a keen love of acting and singing. He ably portrays the mild-mannered and sympathetic intermediary between husband and wife. His concern for Magda and John is matched only by his fear of the omnipresent Secret Police Officer.


Thomas Gunning, as well as playing Assan, is primarily concerned with the sets, sound effects and lighting. Switching deftly between singing and technical support, he also creates dream sequences in which Magda sees John but cannot communicate with him. The clever use of video projection by Thomas makes this and other effects possible in ways Menotti might not have anticipated.

The Consulate, which is the setting for Acts Two and Three, is also populated by many other hopefuls each with their own compelling story. Tim Hunt is Mr Kofner, a very organised and well-presented man who still cannot quite fulfill the exacting requirements of the Secretary.


Despite his own difficulties he helps 'The Foreign Woman' (Gemma Santiago) who only speaks Italian. His translations demonstrate his own impressive command of the language.

Tim and Gemma have performed with Staircase before, and bring imagination and energy to their roles. Tim, well known for his appearances in Gilbert and Sullivan with the St David's Players, is an outstanding comic actor. In the Staircase revue "Myth, Magic and Superstition" he was brilliant as Papageno (see reveiw 7 November 2018).


There are also stellar performances by Matthew Wilding (The Magician, Nika Magadoff), Donna-Marie Broomfield (Anna Gomez) and Pip Gascoigne-Pees (Vera Boronel). Matthew has mastered the art of stage magic especially for this part and performs several impressive conjuring tricks (for the impassive Rebecca Smith) and also introduces an atmosphere of magic into the oppressive environment of the Consulate waiting room - which somehow enhances, rather than allays, the sense of sadness and frustration there.


Donna and Pip each have their own story to tell, and sing beautifully in duet with Rebecca. Despite the continuing emphasis on the trials of Magda and John, they hold the audience's attention with the description of their own problems. A very special feature of this opera is the integration of the actors into the audience. Everyone has to physically move to a new location for Act II in the Consulate - and take their places alongside the characters in the opera. This creates a very intimate sense of involvement in the action.


There are also dream-like sequences when all the actors move around the space (often dancing very gracefully). All of this amazing action is created by Staircase Opera's Stage Director Martyn Harvey, whose attention to detail and creative imagination combine to bring Menotti's original vision spectacularly to life. The diction and language are bright and clear, every aria and recitative is easy to follow and comprehend, and skilfully set to music.


The unseen hand behind this musical achievement is the wonderful Paul McClure who also provides some of the piano accompaniment - with the lion's share of the playing going to his assistant Roger Stephenson. The piano playing is very special in itself, and there are several beautiful interludes which could stand alone as masterful compositions performed with great skill and lightness of touch by the two pianists.

Carolyn, Martyn and Paul have once again shown their mastery of small scale opera production, bringing together a marvellous cast of actors and bringing a very complex and challenging piece to life so brilliantly that Menotti's nightmare world is vividly real for two captivating hours.

There will be one performance per night for the next four nights, starting tonight Wednesday 24 April. Audiences convene at Roborough at 7.15pm for a 7.30pm start. Audience members are advised to be in position in good time - as they are part of the action! 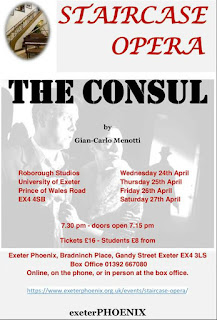