After fourteen months the wonderful 'Living Room in London' have returned to Exeter - this time with their full complement of musicians.

When they last came to Exeter, their Austrian bass clarinettist, Christoph Auer, was not able to join them .  Nevertheless, they played on magnificently, thrilling the Exeter audience, and raising money for the 'Friends of Buburi' Clinic in Kenya.

Last Friday, with the addition of Christoph Pepe Auer, they were able to open the concert with a classic 'Living Room' piece - Manu Delago's own composition 'Constructing'.

Manu Delago played three exotic and intriguing Swiss 'Hang' drums. Although the top of each hang (the 'ding') appears to be similar to a steelpan, as used in the 'canboulay' festival music of Trinidad, the top of the hang is convex rather than concave and, with a base of corresponding shape (the 'gu'), it forms a perfect 'Hermholz resonator'. (A wine bottle is another example - blow across the opening and the air inside resonates making a musical sound.)

Matching this extraordinary sound perfectly was the equally arresting music of Christoph Pepe Auer's bass clarinet. The stunning potential of this instrument will already be familiar to many music lovers in Devon. John Welton showed its classical potential in Stravinsky's glorious 'Rite of Spring' with the Exeter Music Group at Exeter Cathedral (24 Nov 2011). Chris Caldwell regularly pushes the limits of the instrument in 'Music on the Edge' - most memorably in 'Time and Distance' at Gallery 36 (20 November 2010).

Pepe takes things in several new directions - introducing gutteral  and percussive sounds through the mouthpiece - this has to be heard to be fully appreciated, as is the case for the etherial sound of the hang.

The 'Living Room' duo of Manu and Pepe would be well worth the cost of admission - but that's just part of the equation. 'Living Room in London' also involves three string players from the London Symphony Orchestra (fortunately free from their commitments with the orchestra for one night!)

For 'Constructing' the string section limited themselves to accompaniment from the wings (from the back of the auditorium in fact). Then they processed down and onto the stage, still playing, and the full 'Living Room in London' experience began.

Playing together the music of these five artists was quite breathtaking.

Once they were all on stage they launched into Milton Mermikides' 'Escher Café'. M.C.Escher, we all know, delighted in creating artwork which confused the eye with optical illusions. Mermikides recreated Escher's trademark 'never-ending staircase', in sound.  Ellie's explanation was helpful - but we soon got the idea. Rising scales somehow ended up back at the same note. An auditory illusion! Pepe seemed to be working his clarinet in some strange way with his left foot which only added to the confusion. Manu elicited bewildering microtones from the 'button' on top of his hang  The combined sound was simply - spellbinding!

The 'cellist, Gregor Riddell, had prepared something of his own to follow Mermikides' masterpiece. 'Tubular Pulp' pays homage to Mike Oldfield (naturally), but also to Strauss, Radiohead, Bach, Paul Simon, Igor Stravinsky and many more who have inspired the group.

Pepe treated us to some very clever alto saxophone playing, while the string players used lots of special effects, slapping the strings, tapping with the back of the bow. Gregor reintroduced his familiar ricochet style, while Pepe switched to bass clarinet for notes in incredible gutteral croaking style. Manu even inverted his hang, producing new sounds with the edge of his fist - even probing the resonance chamber to find new notes.

Then came Manu Delago's superb sound symphony for hang, woodwind and strings - 'Rising Between the Trains'. We heard this on 'Classical Journey' on Tuesday and it made a very lasting impression. The album track is not a studio recording - it was played in an underground tunnel for maximum effect. Anyone who has used the London underground regularly - especially at night - will have a pretty good idea what this is all about. A very haunting sound of rattling metal and keening strings evokes the lonely 'tubestation at midnight' perfectly. Manu concentrated on his hang-hang, trusting the other musicians totally. Ellie's slow crawl to the highest possible note on the violin fretboard was deliciously excruciating. Fade. End of part one.

After the interval there was no hesitation. Living Room in London launched immediately into 'Lilla Kontrast'. A great start. Pepe's clarinet notes were incredibly percussive and so sensitive to Ellie's violin. Pepe lived for a while in Sweden and his name for this composition means 'Small Differences'. That sums it up nicely!

The arrangement of Miles Davis' jazz classic 'So What' which followed was a perfect tribute to the master. Miles played the trumpet solo on one of the greatest jazz albums of all time - 'Kind of Blue' in 1959. Could the 'Living Room' match that sensitivity? They recorded this track on their unique combination of instruments for the album 'Living Room in Europe'. We were listening to it on Classical Journey two weeks ago. The live version - with a couple of year's subsequent development - was quite something.

Delicate pizzicato phrases on the violins, masterful hang playing, dreamy 'cello - and the alto saxophone! Gregor played glorious glissandi on his 'cello, while Manu produced a new sound - the boom of the bass drum, created by turning the hang on edge and belting that top button.

Tom then changed the mood entirely by taking up a folk guitar - and singing. His beautiful rich voice was astounding. 'Another Song' took us on a devastating journey of remorse - about indifelity in love. The other instruments were brought in skilfully, along with very subtle lighting effects which enhanced the mood perfectly.

Then Pepe took us on another journey - to the Indian Himalayas this time. Apparently, Pepe had arranged to meet the other band members in northern India, but they were unable to join him. He stayed a while and was inspired to compose 'Indian Sandpaper'. The music tells the story of Indian contrast - terrible suffering, poverty and squalor - but also trancendental beauty. Everyone brought their offering to this piece, Gregor and Ellie reaching for the highest notes, while Pepe adjusted the controls on some kind of amplifier - distorting the sound to make it sound like the microtonal music of the sitar. This was a gorgeous combination of sounds, slow, serene - and magical  - with fantastic synchronisation.

Everyone, musicians and audience, were quite dazed at the end of the piece - which was the end of the show. The musicians made their way off stage to amazed applause, returning for curtain calls. Something was needed to bring us all back down to earth.

Ellie had the perfect suggestion, which has now become their signature piece - 'Rondo à la Turc' from Mozart's Piano Sonata No. 11. With hang and bass clarinet, this is a real tour de force. Several extra flourishes have been added over the years, including a virtuoso hang solo - followed by clarinet, naturally. Crazy pizzicato, wild 'didjerido' on the clarinet, everything was new - Mozart would have loved it.

The audience certainly were not disappointed. This was a memorable evening of music by any standards. Long may the 'Living Room in London' flourish! It must also be remembered that the group played selflessly to raise money for a very worthy local charity. 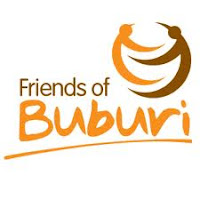 Regular listeners will recall Sallie Buck, trustee of the 'Friends of Buburi' charity, which raises money for a vital clinic in a remote part of Kenya. Sallie is also one of the nurses who works in the clinic - providing essential diagnosis and intervention for fatal, but treatable, diseases like malaria. She told us all about the work of the charity, and the clinic, and how £1,000 provides health care for an entire rural population in remote Kenya for a whole month.

Sallie reports that Friday's concert has so far raised - over £1,000!

Want to find out more, or how to help support the Buburi clinic?
Click here for details.
Posted by Luch Càise-Dearg at 08:02