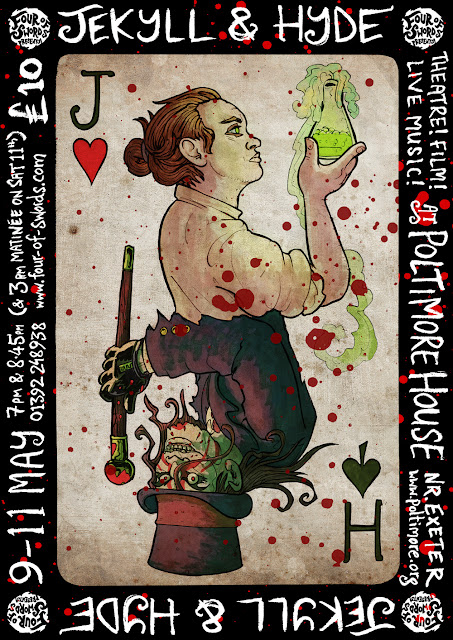 Robert Louis Stevenson's classic moral tale Dr Jekyll & Mr Hyde has secured its place in popular culture, but few people are familiar with the original short story. Given the current trend for all things Victoriana, including the burgeoning “steam punk” sub-culture, it's the perfect time to revive and re-appraise this Gothic masterpiece!

This new adaptation from Four of Swords aspires to be as faithful as possible to the original, whilst providing scope for exciting multi-media storytelling. To this end the spectacular show mixes:

Performances take place inside the majestic but crumbling Poltimore House; a significant Devon landmark, historically and architecturally and one that has a prominent place in ’s culture. A percentage of the shows ticket sales will go towards the restoration fund of this beautiful estate.

Audiences will follow the action as it unfolds within the chambers of the house and will encounter new characters at every turn. Numbers are limited to thirty per show to ensure it remains an intimate and exciting theatre experience so early booking is recommended.

Unsuitable for children under 11.
Posted by Luch Càise-Dearg at 02:57