As part of this year's series of concerts hosted by the St Boniface Concert Society at the Church of the Holy Cross in Crediton, Guitarist David Cottam will be giving a recital of guitar pieces from baroque to modern, including several of his own compositions.

The concert will be on Sunday 4th August at 3pm

David is launching a new CD of recordings, "Encantos", made with Michael Gluyas in Morchard Bishop. The CD will be on sale at the concert, as well as another album also recently recorded with Mike Gluyas - "Contrasts". David will be giving a live performance of pieces on the new record, playing salon guitars made especially for him by Crediton luthier Shaun Newman.

Tickets can be obtained from: 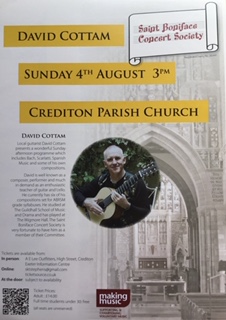