Many thanks to Penny Adie for joining the "Classical Journey" programme on Phonic FM last Friday (22 September) to discuss the Two Moors Festival and the artists who are coming to Dartmoor and Exmoor to entertain us from Friday 13 October to Saturday 21 October.

On this week's programme (Friday 6 October 2-4pm) Penny's Public Relations Officer, Fleur Chaffé, will join the programme at 2.10pm or so - to discuss the festival schedule in more detail.

An overview of the concerts in the line-up is shown below. In each case there is a link to a page on the Festival Website which gives further details on performers, programme and prices - and provides a means to book tickets online.

Posted by Luch Càise-Dearg at 11:57 No comments: Links to this post 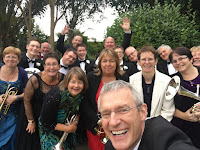 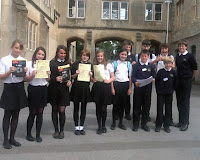 Posted by Luch Càise-Dearg at 15:24 No comments: Links to this post

This Friday's "Classical Journey" programme on Phonic FM will be at 2pm.

The first part of the programme will be dedicated to a discussion with Exeter flautist, Ruth Molins.

On Saturday last week (16 September) Ruth and her flute trio, 'Flute Cake' (Ruth Molins, Sophie Brewer & Jennifer Campbell), joined Lona Kozik and Sam Richards at Hallsands on the South Devon coast to revisit the story of Hallsands' collapse into the sea during the storm of January 1917. Together they gave première performances of  "The Ruined Village" by Lona Kozik and "The Night of the Storm and the Rain" by Sam Richards. The latter included a beautifully scored section for 'Flute Cake' to play on toy bells, plus singing by Sam Richards and Soundart Radio Artistic Director, Lucinda Guy.

This extraordinary recital was performed in a clear-sided marquee on the cliffs above the ruined village, in which were displayed many sea- and fishing-related artworks by Torcross artist Frances Gynn - presented in collaboration with Bill Fletcher-Neal.

Ruth, Sophie & Jennifer will be performing again, during October and November, at three different venues in Exeter. Ruth has composed a fascinating, semi-improvised piece, "Make Room", for performance in any building. The audience follow the musicians through rooms and corridors, while the flutes weave music to fit any environment. This very adventurous approach to musical presentation has already been experienced by appreciative audiences in Ruth's own home. New venues already booked are the Waterstones bookshop on Cathedral Green (7 October), the café in The Glorious Art House (which is half-way down Fore Street in Exeter - 22 October), and Veronica Gosling's 'Studio 36' at 36 Denmark Road (5 November). (Full details below.)

This Music is Yours

First seen in concert together in 2015 ("A Breath of Fresh Air"), flautist Ruth Molins and pianist Alex Wilson will be collaborating again in October. Their new concert tour is called "This Music is Yours" and features compositions by Cornishman Graham Fitkin, Kentish man Ian Clarke, and Parisian Francis Poulenc. Ruth and Alex have also included music by three female composers, Anne Boyd, Claude Arrieu and Ruth Molins herself. The first concert will be on Sunday this week, across the border in Somerset. Two weeks later they will be closer to home, in Bradninch near Cullompton (Sunday 8 October). Their final concert will be here in Exeter in the Baptist Church at the bottom of South Street (Saturday 28 October). (Full details below.)

Exeter Youth Flutes
meet on Tuesdays
(from 12 September)
at 7pm.

Exeter Flutes
meet on Thursdays
(from 14 September)
at 7.30pm.

All students, ten sessions per term for £60 (concessionary rate £50).


On Saturday 21 October Ruth will be joining a group of multi-talented artists & musicians at the St Sidwell's Community Centre (in Sidwell Street). Veronica Gosling, founder and manager of Studio 36 in Denmark Road, has brought everyone together for an event called "Patterns". Starting at 7pm the participants will explore poetry, dance, music and images. Food and drink are also provided. Ruth will be performing with pianist Peter Nickol and singer Peter Farrie. Ruth has also prepared a new composition of her own, "Kitchen, Early Evening", which she will perform at the Patterns evening. (Details below) 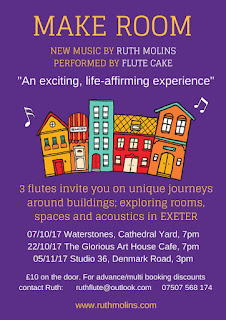 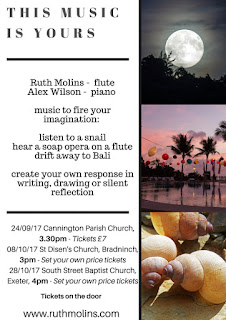 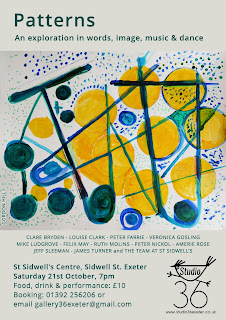 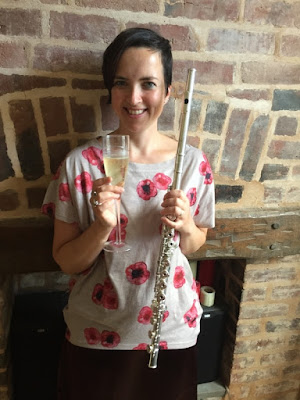 Posted by Luch Càise-Dearg at 11:03 No comments: Links to this post