On Wednesday night An-Ting Chang's "Classical Collision" came to Kings Weston House in Bristol. During the five weeks since her "Carnival of the Animals" concert at Glenorchy, An-Ting has been working on her new production "The Tenant", based on Anne Brontë's novel "The Tenant of Wildfell Hall".

The story was adapted for two actors by Jessica Macdonald and brought into collision with the piano playing of Diana Brakalo by Director An-Ting Chang. The two actors, Martin Bonger and Emily May Smith were spectacular in their rôles, weaving a distressing tale of romance and despair.


Martin Bonger introduced Exeter audiences to his distinctive brand of physical theatre at the Bikeshed in July last year. His own creation "Fat Man" mixed stand-up, audience participation and athletic performance with the classical tale of Orpheus and Eurydice. In "The Tenant" his distinctive style was perfect for the starkly contrasting parts of Gilbert Markham and Arthur Huntington. Gilbert, the gentle self-effacing romantic, is almost the diametric opposite of Arthur, a dissolute and uncaring brute.

With the help of excellent costumes designed by Bristol Old Vic Historian Pam Tait, Martin slipped seamlessly between rôles. As Gilbert he is gentle and personable. As Arthur he is a shocking abuser, his shameless sociopathy descending into the self-pity of the habitual bully as his misdeeds catch up with him.

Bristol Old Vic graduate, Emily May Smith, is Helen Graham, a talented, sensitive young woman, full of lively enthusiasm - but also vulnerable. Her natural desire to enjoy a creative and romantic life attracts the wrong kind of attention, which leads to a repressive and brutish existence. With incredible determination and resourcefulness, she survives - somehow. Emily's passionate portayal of Helen's crushing predicament totally commands the audience's attention.


Integral to the action is the very effective use of the performance space. Wang Jing's set design brings ornate and extravagantly large picture frames into a room already filled to the ceiling with austere family portraits. Helen, a painter, moves between scenes by stepping through the frames, with the audience sometimes looking in from outside, sometimes also in the picture, immersed in the action.


With only an easel and two chairs as props, Martin and Emily, under the additional direction of Movement Director Ben Hadley, create an endless series of engaging and emotional tableaux, the climax of which is a scene of violence so magnificently and cleverly staged that the actors create genuine terror, without a hair out of place. Martin's impressive strength and gentleness is matched by Emily's athletic grace. Together they almost cross over from acting into dance as the play progresses.


Throughout the performance Diana Brekalo is playing the piano. The familiar music of Mozart, Brahms and Scriabin fit so neatly into the action that Diana often seems to be improvising to fit the mood of a scene. Sometimes a distant accompanist, she is also able to overpower the actors with her own passionate outbursts which occasionally become the centre of attention. In a brilliant additional twist, Diana becomes one of the off-stage characters, Annabella Wilmot. The confusion of this surprising switch works every time, a very neat little addition to the play.


In an echo of Martin's "Fat Man" show, where unsuspecting audience members find themselves participating in the action, one audience member becomes a very significant but non-speaking character in "The Tenant", Frederick Lawrence. The actors are very gentle with him, however, and allow him to stay comfortably in the background. The intimacy with the audience which this creates is further enhanced with other interactive scenes where viewers become extras in the play. Body language changes as passive observers come to expect, and want, to be included in the story.

An-Ting Chang, who is just completing her PhD in Performance Practice at the Royal Academy of Music, seems to be endlessly creative. Her combination of classical music and theatre is unique and elicits the maximum effect and enjoyment from both. Her current team are equally talented and work together spectacularly. Martin Bonger and Emily May Smith light up the stage with their outstanding and complementary expressiveness. Diana Brekalo is clearly a very professional concert performer, but with an energetic sense of adventure perfectly suited to An-Ting Chang's "Classical Collision".

"The Tenant" continues in matinée and evening performances at Kings Weston House today (Thursday 27 April)  before moving to the National Portrait Gallery in London for a 6.30pm performance on Friday 28 April and the Drill Hall in Chepstow at 7.30pm on Saturday 29 April. Three more performances are scheduled in Bury St Edmunds, Salisbury and Bath at the end of May. Details and online booking are on 'The Tenant 2017' website. 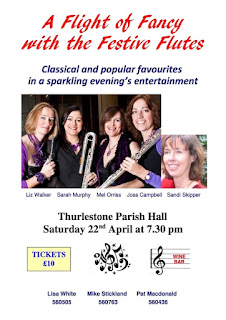 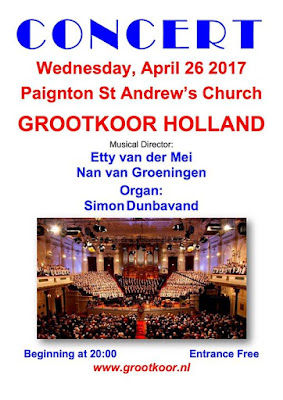 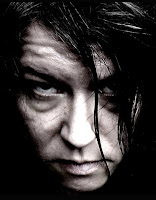 
On Saturday evening at Exeter Cathedral, Leo Geyer introduced himself without preamble as he and the EMG Symphony Orchestra launched into Arturo Márquez' Danzon No 2 in front of a capacity audience. Initially swelling to frenetic intensity, the dance also had moments of relative calm. The overall direction, however was towards extreme excitement. In the end, it was as if a carnival had marched into the nave of the cathedral.

In passing, it is essential to acknowledge the gorgeous interludes provided by Catherine Clements and the flutes (with a very special piccolo obbligato for Rob Stephenson), the trumpeters Miles Taylor & John Bowden, and Leader Clare Smith's violin cadenza with the full string section. Behind all this was an amazing array of percussion. Alfie Pugh was in charge with the help of Ali Board (timpani), Tony Hindley (bass drum), Gary Evans (drum kit), Charlie Hindley, and Zoë Fitzsimmons anchoring the whole performance with her rhythmic wood-block.

To delighted applause, Leo left the stage - only to return and, still without a word, amazed everyone again with George Gershwin's "An American in Paris". The unique feature of this piece is the four 'tuned car horns', which Alfie Pugh had cleverly re-invented with precisely adjusted card inserts. Charlie and Zoë took charge of the horns, while Alfie provided spectacularly inticate bursts on the xylophone.

In all the hustle and bustle of the metropolis, there was also time for a magical violin solo by Clare Smith - joined by David Lotinga on Cor Anglais. There was also another seductively sweet trumpet passage for Brian Moore. There is one very special moment for the tuba, a brief but impressive phrase in isolation, which went to the orchestra's long-standing tuba king, Rob O'Byrne.

After the crashing climax of the Gershwin, the audience were able to mingle with the performers in the South Transept, where mini bottles of wine were on sale - a new and very popular innovation.

The EMG Chairman, violist Rachel Wieck, said a few words on behalf of the orchestra before the second half of the performance got under way. She gave a special mention to Judith Harris-Deans' saxophone section, Rachel Lennon's E flat Clarinet, Peter Dawson's contrabassoon, and the welcome return of the Dartington celeste (brought north by bass clarinettist John Welton in time for Thursday's rehearsal) which was played by 'cellist Carol Galton. She could hardly avoid mentioning the astounding array of percussion instruments ranged across the entire top tier of the orchestra's staging, defying anyone to mention a percussion instrument NOT included in the line-up.

The bass drum player for the night, trumpeter Tony Hindley, got credit as Leo's Associate Conductor for this inaugural concert. Rachel also had news of two more events coming up in the late spring and early summer. On Saturday 20 May the orchestra will give a morning recital in the semi-al-fresco Princesshay shopping complex, and on Saturday 24 June there will be an afternoon matinée at St Peter's School on a fantasy and fairy-tale theme, both to raise funds for Children's Hospice South West.

There was also the tragic and poignently ironic news that founder EMG member, 'cellist Professor Christopher Holdsworth, after an illness which prevented him from participating in Leo's first project, died on the morning of this, the fiftieth anniversary concert of orchestra he had supported and been a part of for nearly all of that time. Chris will be sadly missed.

Fittingly, this sad news was mitigated by the introduction of something unique and new into the evening's programme. Leo added to the Latin/American dance and jazz feel of the evening with his own composition, "Aruanda". The word Aruanda has found it's way into the language of Brazil as a corruption of 'Luanda', the capital of Angola and the last sight of Africa for prisoners abducted and transported to Brazil as slaves. For their descendants Aruanda now suggests a lost paradise longed for, almost a religious heaven.

Although still riven with synchopated dance rhythms, "Aruanda" was a very tender contrast to the excitement and effusiveness of the preceding pieces. Each section, and some solo instruments, pulled this way and that with a compelling sense of yearning, overlapping in complex counterpoint. Every player had to be precisely in control of their own part of the story - which they all did with the impeccable precision so familiar to EMG fans. Under the direction of the composer, Leo Geyer, a very special spell was woven in sound which left a very favourable, and memorable, impression.

Having softened the mood, Leo and the orchestra rekindled the fire of expansive dance with Leonard Bernstein's Symphonic Dances from "West Side Story". More than just dance tunes, this suite tells the familiar story of a tragic love torn apart by partisan loyalties - in this case, the gang culture of 50s New York. Gentle sentimental themes developed slowly at first, until Alfie Pugh's cow-bell called time on romance and things started to really hot up. "Mambo!" cried the whole orchestra as every section roared into action. Gary Evans was having the time of his life at the drum kit - a dream for any percussionist.

The sensitive sound of Carol Galton's celeste, when it came. was an absolute delight - augmented by Alfie's glockenspiel. And Gary's brush-work on the drums was the slinkiest sound of the evening, unstoppably precise and smoothing the wild violence of the other instruments. Brian Moore and the trumpeters were incredible in the energy they injected into the music. Sally Maya, principal French horn, countered that with her own haunting solo performance, leading into the final dying beats of Isabelle Woolcott's double basses.

The audience had been given a very special treat that evening, and were more than willing to join in an experimental encore suggested by Leo from the podium. After a little practice, the whole audience responded to Alfie's cow-bell with a unified cry of "Mambo!" along with every member of the orchestra, and the dance began again. If there was one part of the evening's music that was crying out for a repeat performance, that was it. The perfect rousing finale to Leo Geyer's debut engagement with the EMG Symphony Orchestra.

Former EMG Musical Director, Marion Wood, had made a special trip to England to hear the concert, and I hope she would agree. The magic continues.
Posted by Luch Càise-Dearg at 11:44 No comments: Links to this post