An-Ting Chang's advance programme for today's lunchtime concert at Glenorchy (previous post on this blog) attracted unprecedented interest. "The Carnival of the Animals" was clearly going to be a tour de force of animal-themed excellence not to be missed.


Listeners to Soundart Radio last Friday morning heard an extract from An-Ting's "Sonata Movements" concerts (Mozart Piano Sonata III) and music from An-Ting's album of piano works "Water Image" (Franz Liszt's "Les Jeux D'eaux À La Villa D'Este"), plus an interview with An-Ting herself, back in 2014, when she presented her collaboration with Russell Bender "Classical Collision" at the Barnfield Theatre in Exeter (Shakespeare's "Romeo & Juliet" versus Maurice Ravel's "Rite of Spring" 1 May 2014).


An-Ting is just completing her PhD in Performance Practice at the Royal Academy of Music. ("Classical Collision" was just a side-line!) As an undergraduate she studied Chemistry and Drama at National Taiwan University. "Classical Collision" was a brilliant combination of drama and music, as was the follow-up Arts Council funded project "Kiss of the Earth". An-Ting also excels at solo performance, as we were soon to discover.

David Lee, organiser of the Lunchtime Concert series at Glenorchy Church, was there for An-Ting's rehearsal on the Venables grand piano this morning, and was immediately impressed by An-Ting's virtuoso playing. Jill Govier, who played duets with David at last week's concert, was in the front row to hear this new sound, and the hall was soon packed with an expectant audience of music lovers.


The recital was planned and executed with military precision. In just forty five minutes An-Ting deftly presented animals that fly, animals that swim, and highly entertaining pet cats and dogs, with time left for her own arrangement of Camille Saint-Saëns' "Le Carnival Des Animaux". The explanations before each set were clear and engaging, and drew attention to the special features of each piece (which An-Ting had perfected).


The first flying animal was baroque French composer Louis-Claude Daquin's "Cuckoo" from the early eighteenth century. Immediately the very special skills of today's visitor became apparent. The simple motif of the cuckoo's call was deftly interwoven with spectacularly complex embellishment. In a moment the mood changed with the first of two romantic pieces from the late nineteenth century.


"Quejas, ó la Maja y el Ruiseñor", composed by Enrique Granados, and inspired by a painting by Francisco Goya, introduces a gentle interaction between a young woman and a nightingale. We had been warned, however, that all is not as tranquil as it seems. Off stage, jealous lovers fight to the death for the maiden's affection. The combination of horror, tragedy and beauty were simply and skilfully conveyed, creating a magical atmosphere.


The more fantastical tale of Prince Gvidon being transformed into a flying insect to join his father on his ship at sea, is the most familiar scene from Nicolai Rimsky-Korsakov's opera "Tsar Saltan", having been performed by virtuoso instrumentalists on nearly every instrument. Sergei Rachmaninov's definitive piano version, offered another chance to witness An-Ting's phenomenal dexterity and energy as her incredibly flexible fingers flew over the keys. Too short, of course, - but absolutely delightful.


Franz Schubert's "Trout" has gained a popular image of pastoral tranquility, but Schubert's original song is, like Granados' "Nightingale", a somewhat darker tale. The poor trout is played on a fisherman's line, and ultimately dies an agonising death. Franz Liszt bowdlerised the story in his piano transcription - but Schubert's original intentions can still be heard. The competing impressions in An-Ting's performance once again created something quite unexpected.


Claude Debussy's "Poissons d'Or" is often, and quite naturally, misinterpreted as a musical description of goldfish. An-Ting even obtained an aquarium of goldfish as inspiration for her performance. However, she was soon reminded that goldfish are 'poissons rouges' in French. Debussy was referring instead to the two rather stylised golden coy carp depicted in a Japanese lacquer-work painting in his study, and "Poissons d'Or" was the third of his "Images" (bells, moon, fish) composed for pianist Ricardo Viñes.


An-Ting's muscular representation of the vigorous carp was framed by the gentle oscillation of water weed and fins that Debussy had in mind.


More familiar pieces with a less familiar inspiration followed. Two waltzes by Frédéric Chopin were inspired by the pets of Aurore Dupin (better known as author George Sand). The first was the 'Little Dog Waltz' also known as the 'Minute Waltz' (minute as in miniature) which was composed at Aurore's suggestion, to represent her dog Marquis chasing his tail in the garden.

Aurore's cat Valdeck also features, in the 'Cat Waltz' inspired by the the cat's very natural inclination to try to get involved in whatever Frédéric was doing - particularly the fascinating activity of playing the piano.

The familiar Minute Waltz took on new life, with the complex trills taking second place to the playful antics of the little doggie. Valdeck was even more audible, dislodging the music, mewing piteously, and even running up and down the keyboard. Skilfully done - and such fun!

In a similar vein, Aaron Copland's "The Cat and the Mouse" was an immediate hit and taken up by Claude Debussy's publisher Jacques Durand when Aaron was only twenty years old. Twenty years later, Scott Bradley appropriated Aaron's style (along with others, notably George Gershwin) for his unforgettable scores to Fred Quimby's "Tom and Jerry" cartoons (actually the work of William Hanna & Joseph Barbera). Hanna and Barbera were so faithful to the original works that their animations immediately spring to mind when listening to the music. I'm sure Aaron approved.

He would also have approved of An-Ting's take on this classic chase-scene on the keyboard. Every kind of suspense, surprise and pratfall is represented in music. An-Ting tells the story with all the excitement and energy Copland intended - right up to the final sound of scampering feet, indicating the mouse's final successful bid for freedom, we hope.

The 'main dish' of the recital was still to come, however.


Camille Saint-Saëns lived just long enough to have heard Copland's "Cat and Mouse" in 1920. Thirty four years earlier, for the amusement of his own students, he had composed his own animal-based bagatelle (when, by his own admission, he should have been concentrating on his Third Symphony). Never intended to be part of his recognised canon, "Le Carnaval des Animaux" was also published by Jacques Durand, two years after "The Cat and the Mouse", and is now Saint-Saëns' best known work. It is not clear whether he would have approved!

The original was composed for an informal ensemble of student musicians, including two pianists, a xylophonist and glass armonica player. Modern interpretations may involve a whole string section, but the armonica is often replaced by a glockenspiel.

Specially for today's concert, An-Ting had prepared her own solo piano arrangement of an abridged selection from the original fourteen movements, omitting the Kangaroos, the Characters with Long Ears, and - unexpectedly - the Pianists. This left a magnificent cavalcade of beasts, however.

The Lion, the Hens & Roosters and the Asses were fantastically full of life and used the dynamics of the Venables to its full potential. The Tortoises were something else altogether - slowly and lugubriously performing Jacques Offenbach's Can-Can, so slowly indeed that one has to listen carefully to hear the dance rhythm at all.

The Elephants are ponderous and LOUD, but also capable of gentleness, the kind of contrast which An-Ting exploits to its full potential. The Aquarium ripples with mysterious silence - in the form of sound. So gentle and so sweet, a lovely interlude. The woodwind scales were cleverly replaced by glissandi on the piano.

Then came a very mysterious sound, quite confusing as it was not listed on the programme, but soon the distinctive voice of the cuckoo made all clear - a bonus movement! The Cuckoo was followed by all the birds of the Aviary, and then the familiar melody of Saint-Saëns earlier composition "Danse Macabre" composed twelve years earlier - but now resurrected as the Fossils. In An-Ting's hands those relics were gloriously re-animated, if anything they were even more lively than the live animals in the other movements!

The gentle but equally energetic Swan led into a magnificent Finale. With an impressive eye for the dramatic, An-Ting built on the energy and excitement right up until the final crescendo, closing to a tumult of adulation and applause. In a scene rarely witnessed at Glenorchy, everyone was standing and showing their appreciation as An-Ting made her curtain call.

What a show. David and Jill were utterly thrilled by the piano virtuosity of the new performer, as were the entire audience. 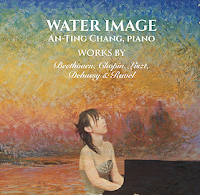 The best news of all is that Mike Gluyas was there to record the whole concert, and An-Ting took part in a short recorded interview after the performance. We can hear those recordings soon on the "Classical Journey". The album "Water Image" was also available at the venue - and we'll be enjoying tracks from that too.


An-Ting's next project, now well under way, is a production of Anne Brontë's "The Tenant of Wildfell Hall" in 'collision' with the music of Mozart, Brahms & Scriabin.

The run will visit a series of art galleries across the country - to add visual images to the combination of literature and classical music. The opening night is Wednesday 26 April at King's Weston House in Bristol, and there will be a second performance at the same venue the following night - before the show moves to London. (But it will be returning to Bath in May.)

An-Ting is very keen to perform in Devon again - anywhere that she can find a high quality grand piano. It won't be long before we get another chance to hear her wonderful music. Watch this space for details.