'Festival at Cygnet' opened in style with a new play by Exeter's theatre veterans, 'Substance & Shadow'. The much vaunted "Silver & Gould" lived up to expectations, and was a perfect showcase for their very distinctive style of theatre. The writers and producers (and also founders of the company), Midge & Rosie Mullin, have created another masterpiece of small-scale theatre.

Liberally peppered with eighties references, particularly to Ron and Russell Mael of the iconic American band 'Sparks', the play revisits the life of dodgy impressario Leonard Silver played by Nathan Simpson. (See "Duplicity" 2014.) The surprising revelation is that Len has a much more respectable cousin, Melvyn Gould (played by Midge Mullin). Both grew up in Birmingham, but only Len has retained the accent. Melvyn, who has been living in London for twenty years, has developed a very odd but endearing accent of his own.

The tale is certainly a moral one. Len, who always chooses the more devious route to his goals (almost always to his own cost), is placed in stark contrast to his very different cousin. Melvyn is a diligent telephone engineer who takes pleasure in doing a good job for his clients. He is also very honest and respectful in his dealings with other people. When he extends the same kindness to his cousin Len, however, he suffers terribly as a result - but nevertheless retains the sangfroid of a man with a clear conscience.

The action is consistently and marvelously comedic, but at the same time relentlessly tragic. Len, of course, is the cause of every catastrophe. He elicits irritation and pity in equal measure. One feels that their twenty years of separation must have been very much to the advantage of the long-suffering Melvyn.

In familiar 'Substance & Shadow' fashion, props are largely eschewed in favour of off-stage sound effects and mime. Sound effects include Len's Minimoog synthesiser (an inspired new facet to his repertoire), television presenters, a video message from Len's late mother, Len's local restaurateur, and the voices of Jim Bowen and the other contestants in a studio recording of 'Bullseye' in which Melvyn and Len compete. The voiced thoughts of our two heroes are also provided offstage. 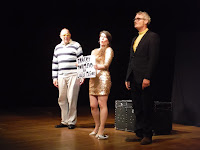 Cleverly making the most of the few props, Tracey Norman (taking the character of 'Leggy McGee'), adds humour to the simplest action by arriving at the optimum moment with the necessary accoutrement (which is amusing in itself) while shamelessly drawing attention to herself through her sardonic facial expressions. She never upstages the main characters, however, and her very showy gold lamé frock is not as ostentatious as one might expect - fitting well with the title and gameshow theme of the play.

This was only the second performance of "Silver & Gould", following the première at the Wardrobe Theatre in Bristol. There will be another chance to see "Silver & Gould" at the Cygnet this Wednesday, at the later time of 8.30pm. Going by previous form, and the spectacular quality of their current performance, it seems very likely that this rather natty little two-hander will be making several reappearances on stages in Exeter and further afield before too long.

For more details of the play, plus details of 'Festival at Cygnet' and how "Silver & Gould" fits into the line-up, follow this link to the previous post on this blog.

There will be another chance to see "Silver & Gould" in the basement of the City Gate Hotel (Iron Bridge Road, Exeter) next week - on Monday, Tuesday & Wednesday evenings at 8pm. Tickets will be on sale at the door.