The Glenorchy 2015/16 concert series is now well under way. This week the fourth recital was provided by mezzo soprano Joan Edgecumbe and soprano Dorothy Ferrier.

Joan held the audience in her thrall for the first half of the programme with a complete performance of Sir Edward Elgar's "Sea Pictures". These five poems by nineteenth century authors were set for voice and full orchestra, and the 'orchestra' was provided by Dorothy Worthington at the Venables grand piano. Dorothy's playing was complex, but gentle, with many very impressive endings played into the ensuing silence. Often a song would end with just a few isolated notes on the piano dying away to nothing - very skilled work.

Joan sang beautifully and faultlessly with great composure, very close to the audience. The songs were long and lyrical, and held the audience's attention like a magnet. Each was sweeter than the last, and the firm favourite was "Where Corals Lie" with words by Richard Garnett.

Sadly, baritone John Brindley was not able to join us for duets with Joan, but Dorothy Ferrier agreed to 'fill in' for him. What a delicious filling it turned out to be. Dorothy took up the baton with Harold Boulton's poem "Song of the Seals" put to music by Granville Bantock (and deftly played by Dorothy Worthington). Dorothy Ferrier's Scots accent made easy work of the complex Western Isles inspired chorus, "Hoiran, oiran, oiran, eelaleuran . . . " etc.

Dorothy (Ferrier) then gave a very succinct and engaging introduction to Sir William Walton's setting of Edith Sitwell's poem "Daphne", which he composed in the 1970s after Edith died, as part of "Façade Revived". (The later compilation "Façade II" can be heard at Exeter Phoenix this Sunday evening, with Kate Westbrook reciting Edith Sitwell's poetry as part of Emma Welton's concert "Lavolta".) The song was equally entrancing, and the story of Daphne's transformation into a tree to escape Apollo delighted us again in musical form.

Dorothy continued to enthrall the audience with Gerald Finzi's settin of Edward Shanks' "As I lay in the Early Sun", and Stephen Sondheim's "Anyone can Whistle" from the musical of the same name, which drew wolf-whistles from the crowd.

Finally the two soloists combined their voices in a comic song created by Robert Lucas de Pearsal after the style of Gioachino Rossini's opera "Otello" (1816). The "Duetto Buffo di due Gatti" has no words, but instead the singers express themselves in caterwauls, half human and half cat. The combined effect is enchanting, and competition between the two singers to find the most cat-like gave a highly amusing finish to the concert.

Throughout, Dorothy Worthington was working diligently at the piano, adding her own special musicality. A very impressive piece of work by all concerned. It was sad that John Brindley could not be with us, but Dorothy Ferrier amply made up for his absence.

Posted by Luch Càise-Dearg at 11:31 No comments: Music in the Castle began as a means of raising awareness of the Brice Seede organ in Powderham Castle's magnificent James Wyatt Music Room. Unplayable for nearly a century, it was restored to its former glory after a remarkably successful fund-raising initiative. In 2013 no less than three Exeter Cathedral organists played the opening recital of the restored organ. Now, one of them, David Davies, returns with a quite remarkable programme.

Far from limiting the music to only the later 18th Century - the organ was built in 1769 - he will be showing us its capabilities in music from the century before, from the classical Mozart, with a taste of the late 20th century, and ending with a superb romantic sonata by Mendelssohn. 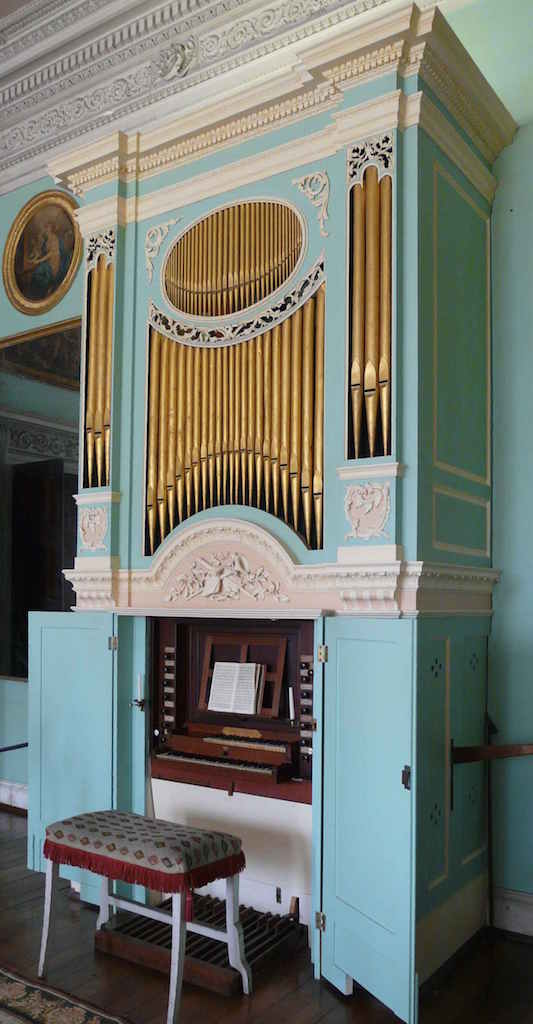 We've never heard such an imaginative and varied programme from the instrument, pushed far beyond the limits of an 18th century house organ. It will be a real musical adventure, and we shall be able to see the action on a large screen display of David's hands and feet in operation!

As ever, we would greatly appreciate your printing of a poster or two (attached here) and displaying them locally in shops, churches, PO's - an element in our means of ensuring that as many as possible know what's on the Music in the Castle programme.

Improvised Suite on the name ‘Powderham’

This year we are celebrating the 150th birthday of Sibelius with his youthful Hafträsk Trio, the music has only recently been edited and Vicky managed to obtain a copy from the editor in Finland, so it’s very much fresh off the press! Come and see if you could hear shades of what Sibelius was to become in his later years.

We are very excited to be playing our latest piano trio discovery which happens to coincide with the much talked about release of the film Suffragette:

Ethel Smyth led a colourful and often controversial life: apart from being the first woman to achieve success as a composer in Britain, she was very active in the Suffragette movement and was put in prison for breaking a window in the Houses of Parliament of a politician who opposed votes for women. When her friend Thomas Beecham visited her at Holloway Prison, he found suffragettes marching in the quadrangle singing Smyth’s battle song “The March of the Women”, with Smyth leaning out of a window conducting with a toothbrush!

Ethel Smyth wrote operas, orchestral music, choral works, songs, solo piano, and chamber music, much of it lies unjustly neglected. Her Piano Trio was written when she was studying in Leipzig in 1880 when she came into contact with Brahms, Grieg and other illustrious composers of the time. It is a most appealing romantic work and certainly deserves to be better known.

Completing the programme is Brahms’s magnificent second Piano Trio in C major, written in 1882 at the age of 49. Brahms was notorious as an unrelenting self-critic but even he was quite satisfied with his efforts in what has become to be regarded as an unequivocal masterpiece in the piano trio repertory.
Posted by Luch Càise-Dearg at 08:07 No comments:

Posted by Luch Càise-Dearg at 04:56 No comments:

The Starling Octet is delighted to announce our next performance - on 7th November at Exwick Parish Church we will be presenting a candlelit evening in recognition of Armistice Day, when we will sing for you the Requiem by Herbert Howells (1892-1983) plus other works, accompanied by readings of war poetry.

The Requiem is a very beautiful and poignant work, written by Howells in 1932 as a memorial to those killed in war. Just a few years later he was devastated by the sudden death of his son Michael aged 9 from polio, and his work Hymnus Paradisi in honour of his son drew heavily from the earlier Requiem, which he didn't allow to be published for another 50 years.

We sang this work in Pinhoe Church in 2011 and it is a Starlings favourite. The recital will start with a prayer led by Reverend Jerry Bird, minister of Exwick Church. The church will be lit solely by candles during the performance.

You are invited to arrive from 7.30pm, free wine and refreshments will be provided until the start of the performance at 8pm.

We expect the performance to last until about 9pm.

Free parking is available in the car park to the right of the church hall.

Please spread the word and the poster for us - we can supply printed posters for you to put up if you want them, just let us know.
.
. 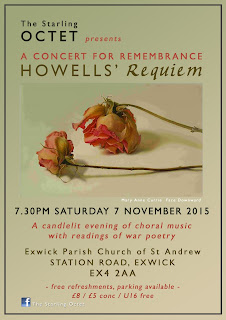