On Tuesday morning this week actor and director, Sebastian Pope, was in the Phonic FM studio to tell us about his exciting theatre venture, 'OwlGlass Theatre'.
With him was a young graduate of the Guildhall School of Music and Drama, Charlott Reinhold. Charlott recently completed post-graduate drama training at the Drama Centre, London. She has performed 10 theatre roles, including the lead in Henrik Ibsen's 'A Doll's House' at the end of last year.
Sebastian first appeared on stage in Exeter in 2007 at the Bikeshed Theatre, in a touring production of Eugene Ionesco's 1950 play 'The Bald Prima Donna' by 'This Particular Theatre Company', which he co-directed with David Lockwood. He has since performed at the Barnfield Theatre, where he also directed the first 'Theatre of the Owl', or 'OwlGlass', production - Joe Orton's 'What the Butler Saw', in 2010. Last year OwlGlass moved to the Bikeshed Theatre, where Sebastian directed and appeared in Tom Stoppard's 'After Magritte', Eugene Ionesco's 'Frenzy for Two', and  Noël Coward's 'Private Lives' - before moving 'OwlGlass' to the Hour Glass Inn in Melbourne Street for 'Pinter and a Pint' - three short plays by Harold Pinter which delighted a capacity audience of beer (and wine) drinkers in the basement.
Building on that success Sebastian has planned four more (bimonthly) OwlGlass productions in the Hour Glass for 2012. On 7th March, Sebastian opened the new 'OwlGlass' series with 'Alas Poor Fred'. This play was written by a 33 year old James Saunders in 1958 and first performed at the Library Theatre, Scarborough in 1959. James had produced several radio plays in the fifties, and had also put on several stage productions - starting with 'Cinderella Comes of Age' in 1949. A month after the opening of 'Alas Poor Fred', a new member of the company made his debut at the Scarborough Library Theatre in a modern translation of 'The Game of Love and Chance' ('Le Jeu de l'Amour et du Hasard') by Pierre de Marivaut - it was the nineteen year old Alan Ayckbourne.
For the OwlGlass production of 'Alas Poor Fred', Sebastian was joined by Lucy Elzik from Exeter University. (Lucy and her University colleagues are currently planning a climb of Mount Kilimanjaro in August - to raise money for water projects in Kenya - see Lucy's page.) Together Sebastian and Lucy were Ernie and Ethel Pringle, a homely couple locked in an endless dispute. Ernie insisted on dragging out of Ethel an explanation of what had happened to Fred - and whether he was the 'man with moustache' in Ernie's photograph. The long-suffering Ethel has plenty of cutting observations to make about Ernie and his obsession with Fred - beautifully delivered by Lucy, who created a delightfully bizarre character for Ethel. Ernie, it transpires knows full well what has happened to Fred - and why. Sebastian's Ernie is doggedly determined to get to the bottom of the 'mystery', and becomes more hilariously confused as the play progresses. This production was lovingly crafted, and played to capacity audiences who became deliciously embroiled in Saunder's improbable conflict. The play was co-directed by Sebastian and a first year student at the Cygnet New Theatre (just 100 yards from the Hour Glass) - Sorrel Meechan. Sorrel's debut as a director was a huge success and she went on to take full directorial responsibility for Sebastian's next production . . .
James Saunders made no secret of the fact that his first Scarborough play drew on the previous work and ideas of Eugene Ionesco. His sub-title for 'Alas Poor Fred' was 'A Dualogue in the Style of Ionesco'. The French-Romanian playwright, Eugene Ionesco, who was 16 years older than Saunders, wrote and produced his second full-length play ('Tueur sans Gages' - 'Killer without a Cause') at the same time as 'Alas Poor Fred'. Ionesco's earlier, one-act, plays were in the 'absurdist' style which inspired Saunders' 'Fred'.
The first of Ionesco's surreal plays, written in 1950, was 'La Cantatrice Chauve' ('The Bald Soprano') which was inspired by Ionesco's experience of the dialogue used in English language courses. Two couples squabble ineffectually using nonsense phrases including the mysteriously disturbing expression 'the bald soprano'. (Sebastian, we recall, appeared as Mr Martin, opposite David Lockwood's Mr Smith, in the Particular Theatre production at the Bikeshed in 2007 - under the alternative title of 'The Bald Prima Donna'.)
'Amédée, ou Comment s'en Débarrasser' ('Amédée, or How to Get Rid of it' - a mysterious dead body that is) was, in 1954, the first of a series of full length plays by Ionesco (the second being 'Tueur sans Gages') which featured the character Bérenger. The last is 'Le Piéton de l'Air' ('A Stroll in the Air') in which Bérenger finds he can walk in the clouds. Often combined with this, is Ionesco's earlier short play 'Délire a Deux' (Frenzy for Two). It is this strange 'dualogue' between embittered lovers, against a background of civil war - and the most likely candidate to be the direct inspiration for Saunders' 'Alas Poor Fred'.

The scene is (retrospectively) familiar. 'Frenzy for Two' opens with a couple cooped up in a small room. This time it's a bedroom rather than a living room. They are lovers, and she repeatedly accuses him of being the 'seducer' who took her away from her husband. For seventeen years they have been virtual prisoners in one room. Outside opposing factions in an unspecified civil war do battle in the streets, making it far too dangerous to step outside. The opening dialogue reflects a rather different dispute. 'She' (played by Charlott Reinhold) endlessly goads 'He' (Sebastian Pope) by asserting that snails and tortoises are the same species. He is clearly frustrated by his own inability to pin down the reverse logic in her arguments, and fruitlessly searches the encyclopaedia for some kind of proof that she is wrong.
The set is beautifully created by director Phillip Wyatt and features lovely touches, which are reminiscent of the period in which Ionesco was writing. A steel framed army bedstead was provided by the Cygnet props department, and the four oppressive overhead lights were - fifties-style aluminium jelly moulds!

Nothing is quite what it seems. As the violence outside intensifies (recorded sound effects supplied by director Sorrel Meechen) the two protagonists reluctantly turn their conversation towards how to keep 'them' out. The 'wardrobe' and the 'table', which are used as a barricade, are actually chests of drawers. The bombs that come through the windows are actually pieces of fruit, the shrapnel kitchen utensils. Sausages salvaged from the bombed flat next door are - a banana!

As the bombardment escalates, the terrified pair dive for cover - under a totally inadequate blanket. The closer confines of their new environment add to the sense of danger - and the ineffectiveness of their attempts to plan for their own survival. Their own personal disagreements get in the way of any effective response, to even the most pressing danger.

Sebastian Pope gives his familiar precise, and engaging, performance, and  brings great comic pathos to the character of the man so brow-beaten and demeaned by this unloving lover that he loses his ability to solve the basic problems of survival. Perfectly played, his character tries valiantly, but fails, to take control of the situation.
Charlott Reinhold is engagingly charming - delivering her lines with a cherubic half-smile. She also brings a chilling edge to the performance - never letting him have the last word, and pouncing on every counter-argument with fresh blasts of illogic. Charlott, who is a very accomplished accent expert, allowed her own native German accent to show through - confusing the audience about the setting of the action, and the relationship between the two characters. This, together with the date of the play - ten years after the end of the second world war - and the references to bodies hanging in the street following the partisan 'victory', conjures up images of the execution of Benito Mussolini and Clara Petacci by the Italian communists  in German held northern Italy in 1945 - two days before the German surrender.
The connection with the second world war is not coincidental. Sebastian chose this play as relevant to the seventieth anniversary of the Exeter Blitz (4th May 1942). Sebastian claims no family connection with Exeter at the time of the Luftwaffe raids, but Charlott does have a very close and emotive connection with another second world war attrocity, committed by the Royal Air Force. She was born near Dresden, a city subjected to some of the most intense carpet-bombing of the war. Knowing this reveals an extra poignancy in her portrayal of the terror of 'colateral damage'.
An excellent production with great performances by both actors. Phillip Wyatt's set contained the action convincingly, and Cygnet drama student Tessa Carob Cook's control of the special effects back-stage were perfectly timed and added thrills to the dramatic tension. And, on her first outing as sole director, Sorrel Meechan made perfect sense of a piece of nonsense from a time long before she was born.

The OwlGlass series continues with Ken Campbell's 'You See The Thing Is This', which will run from Wednesday 4th July to Saturday 7th July. Watch this space for details - and tickets will be available from the Hour Glass soon. 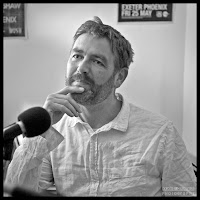 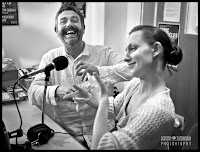